Difference Between Kabaddi And Kho Kho

What Makes an Essay Good?

If there was one overreaching property that could be attributed to all of the technology now in use, it would be its remarkable pace of evolution.

Not unlike an ambitious person, technological progress abhors stagnation and constantly finds new ways to improve its capabilities and, indirectly, the quality of things around it.

Suffice it to say, nearly every place using modern technology would be quite unrecognizable to many barely a few decades ago.

A fine example here would be the call center. Gone are the days of countless employees hectically plugging in phone lines in a desperate effort to connect all the clients.

Even the iconic mainframe computers of old, for so long a staple of any telecommunication-focused enterprise, are a thing of the past.

These have been long supplanted by lines upon lines of sleek, efficient PCs or laptops, only moderately supported by classic phones.

But as cutting edge as modern call centers are for now, inevitably, one day, even these systems will become obsolete. 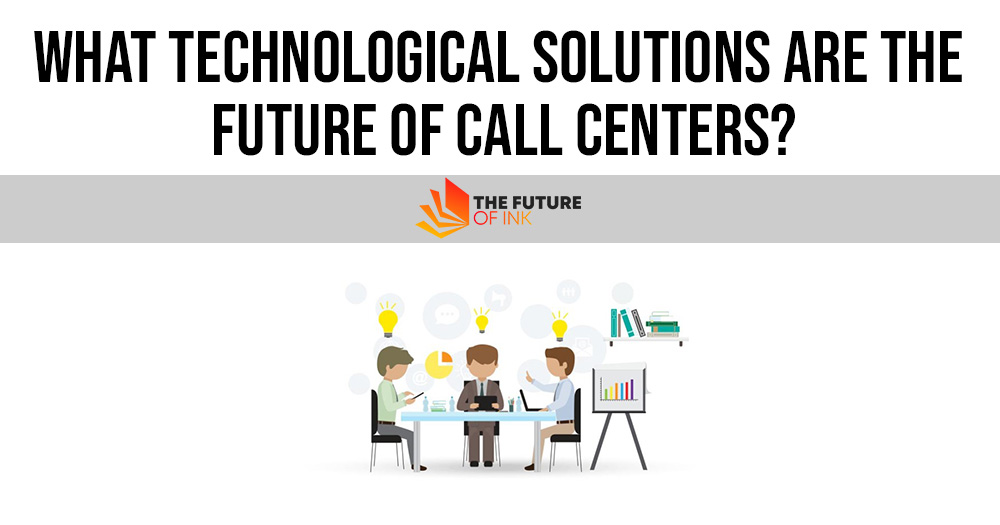 Below you’ll find several technological solutions believed to be the future of call centers, including increased reliance on call center phone systems, continued expansion of live chat services, and the relegation of simpler tasks to the AI.

Explore these ideas below and learn what to expect of the call centers in a few years!

If there’s one item that has defined the call center for decades, it’s the phone. Even though the advent of the Internet has made communications quite a bit more accessible, it hasn’t stopped the telephone from serving its purpose.

While you might think that the phone is a mere relic of simpler times, it’s still one of the most popular forms of communication in the world. But that doesn’t mean it can’t be improved upon.

In fact, this point is exactly why numerous modern call centers are investing in a more Innovative Phone System for Call Centers such as the one using IP phones.

The IP phone works by taking what was once an analog signal and transforming it into a digital one, making it much easier for other digital devices to communicate with one another without any loss of quality.

The IP phone can also support VoIP, or Voice over Internet Protocol, which is a technology that allows for calls to be made and received over the Internet.

This is a big step up from the traditional phone lines, which are often considered a major hindrance to call center efficiency.

As a result, this IP phone is able to provide higher levels of security, more flexibility in terms of call routing, and a smoother transfer of information between callers and operators.

This isn’t the only phone system on the market, however. If you’re looking for something more flexible and customizable, then you might want to consider an IP PBX.

Here, you can get your hands on a solution that will allow you to manage your entire call center via a single platform.

It can also be used to provide access to online communications and customer support tools. And if you’re looking for a truly cutting-edge solution, then you might want to explore cloud PBX systems.

With these, you can easily change how your entire system works with little hassle. This is helpful for those who want to experiment with different tools and still have the option of reverting back should they wish to do so.

If you think about it, live chat services are pretty much the futuristic version of telephone answering services. Both involve taking incoming inquiries, formulating responses in real-time, and managing all the incoming feedback as quickly and efficiently as possible.

While this may not seem like a very complicated process at first glance, it can actually be quite tricky when you try to keep up with all the demands of your customers.

The reason for that is a simple one: there are literally dozens of ways to tackle live chat and customer service operations, and some are far more effective than others.

Here’s the thing: you can use live chat software or something like it to create an automated chatbot that will automatically respond to the most common questions by itself.

This way, you can save time and effort by letting your customers communicate with an AI instead of directly with an operator.

But if you really want to get the most out of your live chat services, then it might be better to do it manually, at least until the technology becomes more advanced.

The Reliance on Artificial Intelligence

It’s hard to believe it sometimes, but artificial intelligence is already a reality in many areas around us.

Look no further than Google Assistant or Siri – these are examples of AI assistants we now take for granted! But even if these are just operating under the surface of our everyday activities, there’s no denying it: AI will soon play a much bigger role in our lives.

And that’s precisely why companies are already investing in its development and implementation into their systems and practices.

This could revolutionize your business operations even further, so you might want to keep an eye out for AI-based solutions in the near future.

While AI is still in its early days of development, many businesses have already started to use it for their call centers. This is thanks to the fact that an AI bot can handle simple queries and requests by itself, freeing up human operators for more complex tasks.

For instance, your customers could be asking questions about your services, after which the AI would provide them with some general information, leaving human operators to take care of the more pressing matters.

Or, if you’re looking for a way to improve your internal communications, then you could use an AI bot to automatically send out reminders and other important notifications at the right time, relegating the employee previously doing that to more important tasks.

There’s no denying that technology has evolved to the point where it’s now capable of replacing many human roles in the workplace.

But while automated systems and artificial intelligence are already making their mark on call centers, they’re not there to completely replace human operators.

Rather, they’re intended to make their lives easier, allowing them to focus on more complex tasks and issues.

So even if you’re looking to implement new solutions in your call center, you should always keep a human touch in mind.

Because after all, what makes us really special is our ability to engage with one another, something that no machine as of yet can even come close to.

How Easy is it to Create Stickers Online?

16 Types of Videos You Can Create

The Best Alternatives to Amazon KDP for Your Self-Published eBook

Why Data Backup Is Important for Your Business?

What’s the Correct Length for an Ebook?

Kindle Pricing Strategies: How to Price Your eBook for Maximum Success

Standing Desk Versus Ergonomic Desk Chair: Which is Better?

The Top 9 Writing Mistakes And How To Fix Them

Do You Want to be a Currency Trader?